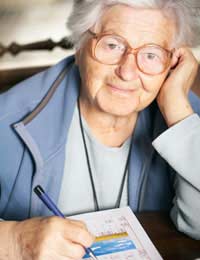 Skill-based competitions offer compers the chance to break away from the competition herd by winning prizes using their puzzle-solving abilities.

What are Skill-Based Competitions?

Compers may have their own peculiar techniques of increasing their chances at prize draws and instant win competitions but the games that give them the opportunity to set themselves apart from the casual entrants are the skill-based competitions. Spot the difference, spot the ball, word searches and the grand master, the crossword, all allow compers to earn their prize by flexing those comping brain muscles.

Anybody can enter instant win and prize draw competitions, as there are no real demands on time, effort and brain power. As a consequence the entry numbers tend to be high and the chances of winning low. Skill-based competitions on the hand require some degree of thought, and this aspect puts off a remarkable number of entrants, who just don’t have the time, patience or skills to complete them. The result of this, of course, is that skill-based competitions do not attract as many entrants and therefore the chances of winning are increased considerably.

So as a general rule the harder the competition, the greater skills needed and the fewer the entrants, thereby allowing the sharper compers to take full advantage!

There are a great number different of skill-based competitions scattered across newspapers, magazines and internet sites. The most popular prize-winning competitions are crosswords, spot the difference, order of merit, spot the ball and word searches.

Crosswords need little introduction as they are the most common word puzzle, appearing in newspapers and magazines the world over. They typically appear as a black and white squared grid, with the aim being to fill the white spaces with the word answers to the accompanying clues.

Crosswords vary dramatically in difficulty from very basic general knowledge question clues to the taxing cryptic crosswords, which require a peculiarly tuned brain to solve. The competition crosswords popular with compers are usually not too demanding and often don’t even require the entrant to complete the whole puzzle but instead work out a word anagram from highlighted letters in the crossword.

Powers of perception are tested in the spot the difference games, in which competitors have to compare two subtly dissimilar pictures and mark all the differences. To make the game easier to complete, the number of differences are often provided.

It is up to the competitor as to whether they try to complete order of merit games using their grey matter skills or the element of chance - although many start out burning up their brain cells before ultimately giving in to chance.

In this game features or items have to be arranged into a pre-determined order of importance. This could involve grading aspects to a motorcar or the quality of a series of films. It sounds relatively easy but can prove quite difficult. Those uncertain tend to try the odds by attempting an informed guess. However, the greater the number of items, the lower the chances are of getting it right. For example for six items there are 720 potential combinations, which means odds of 1 in 720 of getting it right.

The spot the ball games test participants’ skills at informed guesswork. In such competitions a photograph of a football match scene is presented only the ball itself has been removed. The job of the competitor is to place a cross where they think the ball should be. The ratio of skill to luck involved in such a game is a subject for debate, particularly as the ball’s position has usually been decided by a judge and not by the football match represented.

A square grid of ostensibly random letters provides the playing field to the classic word search game. The aim of the competitor is to find words hidden vertically, horizontally or diagonally within the word mêlée and then highlight them. To make it easier sometimes a list of the hidden words is provided, but for true word smart compers the best and most challenging word searches are those without.