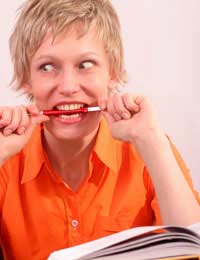 With their thick air of mystery and impenetrability, cryptic crosswords manage to scare away even the most committed word fiends, but the art to cracking their code is not a secret skill, just a little understanding.

Cryptic crossword puzzles are commonly considered to be the grand challenge of word play fanatics, and have been delighting and infuriating puzzlers in the UK for close to a century. Part of their appeal is that those adept at the art feel part of an exclusive society, and everybody else is left to look in from outside with a mixture of curiosity and bafflement.

Cryptic puzzlers are not necessarily unique and hallowed individuals however. They just understand the somewhat strict set of rules that are the key to deciphering the mystery of these devious crossword puzzles.

As befits their name, cryptic clues are designed to confuse and lead one in the wrong direction, with their surface meanings usually a distraction to the solution. To unravel the mystery and the meaning, the clue needs to be first deconstructed into two separate parts – the definition and the ‘secondary indication’.

The definition almost always appears at either the start or end of the clue and, as in regular crosswords, is there to provide a basic interpretation of the answer. The secondary indication, or ‘subsidiary indication’, invariably leads to this same answer but in a more devious and roundabout manner. In its simplest form, ‘the double meaning’, it is just another definition of the answer, however in the more traditional puzzles, the secondary indication is used as a cryptic device.

The cryptic device is what marks cryptics out from regular crosswords. It can take on many different forms, from the anagram and the homophone to the split word and the hidden clue, but it is left up to puzzler to decide which is being used. Nevertheless, those that successfully decipher them will be led to the same answer as the definition.

When an anagram device is used it means that one of the words in the clue should be rearranged in order to produce the answer. But how would know when one is being used? To save such confusion an anagram indicator is used to tip off the puzzler. This ‘indicator’ word or phrase suggests that the letters have been mixed up and such a term might, for example, include ‘confused’, ‘play’, ‘like’ or ‘could be’.

A homophone is when the cryptic part of the clue refers to a word that may sound like the answer but is spelt in a different way. Therefore the homophone indicator tends to be a term referring to listening or sounds, such as ‘we hear’ or ‘sounds like’.

Split words, or composite words, are when the solutions to two different parts of the clue form together to create the answer. The two words or abbreviations can be joined together at each end or even fitted inside one another in order to produce the answer.

These clues appear very occasionally to offer a bit of light relief and a chortle. In pure cryptics the definition and the whole clue are all the same thing, thereby abandoning the traditional cryptic rules as tirelessly outlined above! A famous example of this is ‘Bar of soap’, which is interpreted as the pub in the Coronation Street soap opera called ‘The Rovers Return’.

How to Win Photography Competitions